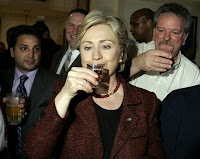 Hillary hoists a few as the fallout from Barackis Obama's "bitter" speech continues...

"And it's not surprising then they get bitter, they cling to guns or religion or antipathy to people who aren't like them or anti-immigrant sentiment or anti-trade sentiment as a way to explain their frustrations,"

This comment is bad enough on its own, but when you add the remarks from Pastor Wright, and the remarks from Michelle Obama, doesn't it seem that Obama has some lingering bitterness of his own against America, or dare I say it, what he considers "typical" white Americans?

McCain is looking better every day.
Posted by cube at 11:47 AM

I'll cling to my religion to give me moral guidance, not a bunch of wealthy lawyer beurocrats who think they know what is better for me, thank you very much.

Obama's an open commie bigot, and Shrillary is a gun-toting, hunting, drinking Southerner.

This is the best Dem fight in my memory! It just doesn't get any better than this!

When do you suppose they'll quit tearing each other apart? This is fascinating, but I can't imagine this is helping either of them...

Dr. John: I hear you. The clinging to religion & guns was bad enough, but when he basically referred to them as xenophobic racists... that was the last straw.

The arrogance, the hubris.

brooke: They're both LYING, and it is so much fun to watch them battle.

jen: You're right. This internecine fighting is damaging the dem party. Good thing they don't seem to care about that.

Me, I'm having too much fun watching them fight so I hope they
keep at it until all that's left is an easily defeatable little nub come November.

I've got that Jill Solbule song in my head now...

Hillary is such a regular, everyday person. She drinks and shoots. What a gal!

Obama and his wife are just lowly souls who know what it's like to scrape their way up from the bottom and trample typical white people in the process. America has been mean to them, and we need to cut them some slack, so Michelle can continue to be proud of her country.

Better than what? He is not even dynamic enough to be VP.

sue: Better than Barack and Hillary, that's who. Is anyone else running?