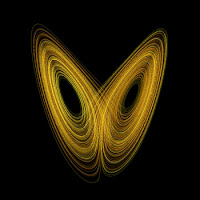 I don't know how I missed it until now, but Edward Lorenz, the father of chaos theory, died on Wednesday.

Lorenz, a meteorologist from MIT, was was perhaps best known for the title of a 1972 paper, "Predictability: Does the Flap of a Butterfly's Wings in Brazil Set Off a Tornado in Texas?" The memorable title pithily summarized the essence of chaos theory -- that very small changes in a system can have very large and unexpected consequences.

Wolfram Mathworld and the Wikipedia both have adequate summaries of the math behind the Lorenz attractor pictured above.

Considering NASA's miscalculation earlier this week, Apophis Closer Than NASA Thought , I think it would behoove them to revisit Lorenz' work.
Posted by cube at 11:47 AM

It's the fear of trig and calculus...a healthy fear! LOL!

farmer would love this post - perhaps i'll go put a bug in his ear...

The NASA miscalculation turned out to be an urban legend. But I've never heard of a Lorenz attractor before... so thanks for the poke!

Yep, just as I thought. Eros, AGAIN! The ultimate attractor!

Hail, children of Zeus! Grant lovely song and celebrate the holy race of the deathless gods who are for ever, those that were born of Earth and starry Heaven and gloomy Night and them that briny Sea did rear. Tell how at the first gods and earth came to be, and rivers, and the boundless sea with its raging swell, and the gleaming stars, and the wide heaven above, and the gods who were born of them, givers of good things, and how they divided their wealth, and how they shared their honours amongst them, and also how at the first they took many-folded Olympus. These things declare to me from the beginning, ye Muses who dwell in the house of Olympus, and tell me which of them first came to be.

Verily at the first Chaos came to be, but next wide-bosomed Earth, the ever-sure foundations of all the deathless ones who hold the peaks of snowy Olympus, and dim Tartarus in the depth of the wide-pathed Earth, and Eros (Love), fairest among the deathless gods, who unnerves the limbs and overcomes the mind and wise counsels of all gods and all men within them. From Chaos came forth Erebus and black Night; but of Night were born Aether and Day, whom she conceived and bare from union in love with Erebus. And Earth first bare starry Heaven, equal to herself, to cover her on every side, and to be an ever-sure abiding-place for the blessed gods. And she brought forth long Hills, graceful haunts of the goddess-Nymphs who dwell amongst the glens of the hills. She bare also the fruitless deep with his raging swell, Pontus, without sweet union of love. But afterwards she lay with Heaven and bare deep-swirling Oceanus, Coeus and Crius and Hyperion and Iapetus, Theia and Rhea, Themis and Mnemosyne and gold-crowned Phoebe and lovely Tethys. After them was born Cronos the wily, youngest and most terrible of her children, and he hated his lusty sire.

Cause and Effect. We say it is "explanation "; but it is only in "description" that we are in advance of the older stages of knowledge and science. We describe better, we explain just as little as our predecessors. We have discovered a manifold succession where the naive man and investigator of older cultures saw only two things, "cause" and "effect,"as it was said; we have perfected the conception of becoming, but have not got a knowledge of what is above and behind the conception. The series of "causes" stands before us much more complete in every case; we conclude that this and that must first precede in order that that other may follow - but we have not grasped anything thereby.

So much for the "butterfly effect".

father john: It is also referred to as a strange attractor. The butterfly effect is just a prosaic way of saying that tiny input errors can produce huge output mistakes.

I don't believe in input errors, cube. Just calculation ones. ;-)