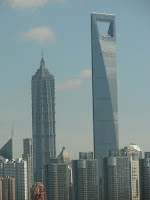 On Wednesday, the Empire State Building will be lit up in red and yellow in honor of the 60th anniversary of the ChiCom revolution.

Golly gee, I can't wait for the Shanghai World Financial Centre building being lit up in red, white, and blue next July 4th.

Gee that other ugly buidling looks like a giant bottle opener. It distracted me. Sorry.

Gee I guess we owe so much that we have to kiss extra hard now.

The bottle opener is the Shanghai building.

You're right about the kissing part and you don't know how much that burns me in certain parts!

Ananda Girl essentially said it so.

We owe China a lot of money.

It's time we eat a LOT of eggrolls.

So if we ever have a revolution in this country and overthrow our government...does this mean we still owe the Chi-coms or do we just tell them to go screw off?

Sheesh - are we in trouble or what?

Steve Harkonnen: Which is why it is imperative that we get our financial house in order ASAP.

EDGE: I don't know about that, but I would like to know who's bright idea it was to celebrate the ChiCom revolution. Some commie loving liberal, no doubt.

crazy4coens: Yes. I would help if BO and the rest of the politicians tried to get us out of this trouble rather than adding to it at every opportunity.

They own us. I'm brushing up on my Mandarin.

That really bugged the heck outta me!!!
I guess we are butt kissers when it comes to China.

RightKlik: I'm not betting against America just yet. We can work ourselves out of this liberally-induced dilemma.