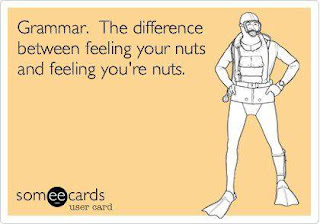 Some people argue that this is a punctuation issue, but isn't punctuation a subset of grammar?

Speaking of nuts, a long time ago I had a boss for whom English was a second language and hilarity ensued sometimes when he misspoke. One time he told me that he was losing his nuts. I said that unless he was suffering from some mysterious illness, he was "going nuts" or "losing his mind", but he was most decidedly not losing his nuts.

I'm just glad I didn't have to learn English as a foreign language. So many pitfalls.

English is a tricky language, but it's easier if you start learning it at a young age.

Jan: BTW where do you stand on the punctuation vs. grammar debate?

Either way losing your nuts is not a good thing.

Have a brilliant day. ☺

Sandee: I can only imagine that it wouldn't be a fun event.

No one has answered whether this is a punctuation versus a grammar debate. Comon, people, let me know.

We were taught punctuation as a part of grammar, i don't see them as separate. Spelling, however, is a totally different issue!

This is a spelling issue.

For the guys though, this is a major issue. I'll stop here.

As a high ranking officer in The Grammar Police, I approve this message.

Messymimi: That's what I thought, too. Grammar included all the rules of the spoken language, but I thought spelling was part of it, too. That's the debate.

Kid: You're on that side of the debate. I always thought grammar included all of the rules of language usage. I think we need an expert to fully muck up this issue ;)

Always On Watch: I knew I could count on you :)