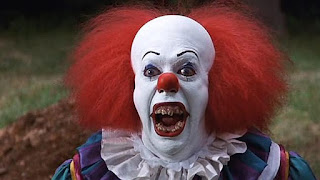 and now it's Ronald McDonald...

What is wrong with people?
Posted by cube at 9:47 AM

What is wrong with people?

Our society is devolving!

We sure are. Signs of devolution are everywhere.

I've always thought RM was kind of creepy, but the idea of damaging an icon is sick. The Ronald McDonald House is so needed and appreciated by families with sick or damaged children.

Jan: I vehemently oppose clowns, but I don't go around defacing their images. The Ronald McDonald House is a great charity and the bench with Ronald was a big hit with the kids that found themselves having to be in their care. How can people be so heartless?

Sandee: I don't know about that. We minded our parents as long as our parents were around and we pushed the envelope when they weren't. Maybe we celebrate celebrity too much. I think there are too many cameras around and people act up when there's a camera in the room.

I blame the Kardashians and Bruce Jenner for these outrages.

LL: Mayhaps they are responsible for such outrages. Has anyone looked into Paul Ryan's recent timeline?

Fools take pleasure in hurting people or damaging other people's property. They think it's funny, unless it happens to them.

Messymimi: There's no shortage of fools...

Cube. A lot of people are some serious level of screwed up in the head.
My personal leaning is that people need structure and cohesion. When lawlessness abounds and few things make sense (Hopefully you can all think of current events examples), I think a certain type of individual just falls off the rails a lot easier.

Well, I will expand a bit. Kids in school being told that being patriotic for their country is no longer acceptable, and they're being disallowed to do it on their own even. black lives matter. hey the economy is great, but there are 40% of the working population out of work. The country is literally being invaded by mexicans, moslems and others and the rules don't seem to apply to them - be a rapist and obama lets you out of jail without deporting you - you don't need insurance. Have an accident, get a note to appear in court in 30 days, you don't, you don't pay for the accident, there are no consequences. Kids being drugged in school - breakdown of the family unit in huge numbers - divorces way up - look at all sorts of perverted stuff on the net. You get the idea. Kids are growing up without a compass and are easily persuaded by others or themselves to do idiot things like mass murder, especially when they're on psychotic drugs prescribed by libtard head shrink.