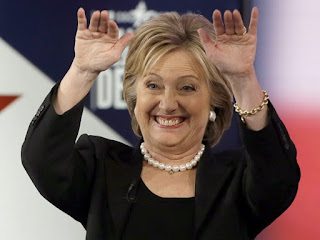 Why Did NBC News Sit On Explosive Story About Clinton’s Alleged Hacked Email Server For Weeks?

That's a rhetorical question, right?
Posted by cube at 2:47 PM

The press are a bunch of hacks. They are bought and sold often. No use for most of them. Let's not even start with Hollywood. That's another cesspool.

Sandee: Why wait until 2016? She should be in jail right now.

Oh, you mean she had an e-mail security review?

I want to see her tied to the tracks so that the Trump Train can roll over her.

Yet the wicked wriggle out of so many of these situations, which makes it all that much worse.

LL: I hope you're not banking on any kind of review of Hill's email shenanigans because I don't believe that Barry's DOJ is going to facilitate anything beyond a wrist slap. I would love to be wrong just this once.

Messymimi: Hillary has made the wicked wriggling out of trouble into an art form.