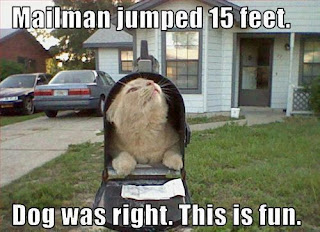 I think we'll see an uptick in the attack cat market as a result ;)
Posted by cube at 11:47 AM

I no longer leave mail to be picked up in my mailbox. The scummy thieves bleach the ink and write their own checks

This had been happening in our area for a very long time. Community mailboxes they force open. We rented a box at the post office and they came in at night and tried to pry those open. Now our post offices closes when they go off duty. It's an epidemic here. This is California and there are thieves everywhere. There are gang members everywhere. It's a cesspool here.

Have a fabulous day.

Jan: I've heard about people stealing mail from mailboxes, but it's never happened to us. If I'm at the computer, I can keep an eye on the mailbox. I only do that occasionally because most of our mailing is done online... yeah, and that leads to a different type of identity theft. We have Lifelock, but they'll only help after the fact. Not much consolation, eh, the scumbags outnumber us by far.

Sandee: I had no idea it was that bad in your area. It's only a matter of time... like I said to Jan, the scumbags outnumber us and their numbers are growing faster than ours.

I think an attack cat would be a good thing! MEOWWWWWWWWWWWW!

Put a bobcat in there for better results. Or a cottonmouth.

We have thefts here, too, so i take everything to the post office and go in to mail it.

This is just coming to Los Angeles...suddenly, as Jan said, thieves "wash" the checks and write their own info on it...
My mother put her checks IN a POST OFFICE BOX and they were washed so we know it was someone at the P.O....that also happened to someone else..INTO the POst Office boxes, which are virtually tamper proof!!
we could at least trust the Post Office before!

Scamming in all categories has gone bonkers. Why? Too many stupid people falling for it.

Cube - That would scare me too. If I opened a mailbox and found a cat inside of it.

LL: A bobcat would be a little big for a mailbox, but a cottonmouth would fit the bill. Yeah.

Messymimi: More and more, we do that too. What a world.

Z: That is very disturbing to hear. More and more, we're in a position to question many institutions that we never thought would be against us.

Kid: The world has changed and not necessarily in a good way. I remember a time I could trust leaving the mail in the mailbox, but I'm not comfortable doing that anymore. What a world.

Sue Hanes: That's just a joke. We're trying to find a way to keep the identity thieves from our mailboxes, not our postal carriers.