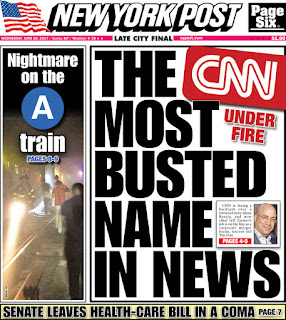 Will CNN ever learn?

Colton Haab, a member of the Junior ROTC who shielded classmates during the shooting, said, "CNN had originally asked me to write a speech and questions and it ended up being all scripted."

Every weekday I watch HLN's morning news show. HLN is CNN's sister network. Yes, my husband teases me about getting brainwashed and defecting to the other side, but I watch it anyway. This morning the lead story was the "town hall" and the clips aired were gotcha moments by the useful tool children and some parents demanding gun control.

There was no mention of Colton Haab and the allegations of CNN's "manipulation" of the program.

I'm curious to see how this newest CNN fake news bust will play out with the other arbiters of "news."

CNN is a waste of time. They are so anti Trump they have lost their way. They will do and say anything to take him down. The problem is that most of know they are a bunch of hacks.

Sandee: Waste of time, yes, definitely, but still dangerous because not everyone knows they're hacks. Almost half the country believes the lies.

The mainstream media seems to rally around CNN, known now and for the last few years, as purveyors of fake news. They are all corrupt, wicked, lying, smug, and oh, so elite.

I think even the most hardcore leftist knows they are a waste of time.

LL: I know that CNN doesn't even bother to hide their bias anymore, but half the country is on board with the media lies. They still wield considerable power.

Jan: I think hardcore leftists know it's a pack of lies, but they don't care. Churning out the propaganda is still useful to them. Look how wound up they've gotten those Parkland students and their parents. They'll not allow any crisis to go to waste.

it boggles my mind how they continue to get away with this.

Haab was on Tucker tonight.
Came off well.

Kid: CNN has a lot of money backing it up despite it's consistently poor ratings. They are becoming more bold in their bias and, thanks to their well-heeled backing, are still a potent propaganda machine.

Messymimi: It always pays to follow the money and CNN has serious money backing their organization.

Ed Bonderenka: Good. I feel sorry for all these kids that went through the horrible events of that day, but I also feel sorry for what some of them have gone through because of the manipulation of hateful, power hungry adults. If Haab wants to speak out, then he has just as much right to do so as any of the others. CNN has no right to stifle his right to free speech because it doesn't fit their agenda.

Crap. I'm flying to your state today which means I will probably catch a little CNN out of my peripheral vision at the airport for a minute or two. If I'm mumbling incoherently next time you see me, you'll know why.

DaBlade: Maybe you'll get lucky and catch one of those epic pharmaceutical commercials and no news. A tip for your Florida visit, bring shorts 'cause it's going to hit 84 degrees today.