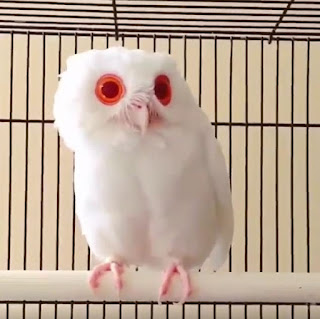 This Rare White Owl Has Been Found, And It Has The Most Mesmerizing Eyes We’ve Ever Seen.

He's a rare albino screech owl and, yes, he is stunning.

Albinism is fascinating, and that owl is so pretty. It looks so much like a stuffed animal, even though i know it isn't.

Messymimi: I find it fascinating that albinism occurs in so many different animals. BTW you're not the first to think this owl isn't real. If you follow the link, they provide a video of it moving around just for that reason :)

I like this fluffy fella. His eyes look like the morning after a bender and night of club'n tho.

DaBlade: He does get around. I've also heard rumors about him flying off the handle easily ;)

I had to see it moving to believe it was real.

He's adorable. I watched the video too. I also linked this post to Awww Mondays. He qualifies as a huge awww.

Jan: The video was included for just that purpose. Except for the eyes, this owl reminded me of Hedwig, Harry Potter's owl. I will never forgive JK Rowling for killing him. It was a gratuitous murder that wasn't necessary to advance the plot.

Sandee: He is adorable, but his eyes are a little weird. He doesn't know how different he looks. In his mind, he's just an owl.