Joe, Say It Ain't So 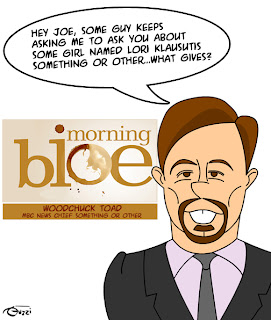 Joe Scarborough's Brutally Honest Take On Michele Bachmann: She Is A Joke

Careful, Joe. Some might call you a joke. Remember this...

A Death In The Congressman's Office: Does Anybody In The Press Care About Lori Klausutis?

If it weren't for RINOs, conservatives wouldn't need enemies.

Since when is being honest a bad thing. No wonder most congressmans are slimeballs... they get away with it!

dont u love how easily they hurl insults Cube! Have an awesome weekend my friend!:)

Holy crap! I never even heard about the Lori Klausutis story. Not a word out here on the opposite end of the country. No wonder her family is angry. Way too many questions here.

The media controls what we see or don't see far too easily!

silly rabbit says she's never heard of the Lori Klausutis story before...fascinating, and understandable because it got so little play considering the seriousness of what happened.

SOmething clicked in my head when I heard her comment....... suddenly, Joe Scarborough, who so many of us had admired as a pretty good conservative, turned to the left in a big way..
silenced story.....turning to the left....coincidence?

probably not. But do I admire him anymore? God, no. not for YEARS now.

Cube - I know nothing about Morning Joe, and had to google Lori Klausutis. I may have caught that story when it happened, but have just forgotten.

Anyway, just saying that I really don't know what it's all about - and probably would be better if I hadn't commented at all, don't you think? :-)

I guess I just like to see my thoughts in print!

They can't handle the truth and when they know they have lost the battle the insults start flying.

Paul Wynn: Most of them do get away with behavior the rest of us wouldn't.

Silly Rabbit: I think it fell off the radar because the media was obsessed with the Chandra Levy disappearance, but you're right about them controlling what we see too easily.

Chuck: I agree. I go to Morning Joe just to see what the lefty talking points are going to be that day. It mostly makes me groan, but sometimes I get a chuckle.

Z: It is curious, isn't it? Did you know that Scarborough and Gary Condit were buddies? I wouldn't want my child interning for either one of them.

Karen Howes: He's got a big mouth and a small audience.

Sue: Always feel free to comment. I welcome your thoughts (even when we disagree) and I could use the hits ;-)

Leticia: That's how they roll.