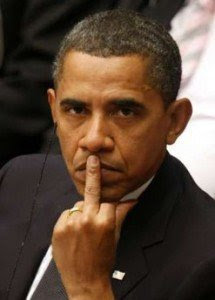 Obama must have been thinking all this time, "America apparently can't take a joke"...

Your link has been taken down. Bugger.

Worst president ever. It will take years to climb out of the huge hole that he's kept digging at.

Link's broken but whatever...I saw a clip of Obama at last year's Correspondent's Dinner, which I LOVED watching until he took office..he joked that they ask about his "bucket list" and how he uses it this way: "This is a problem? BUCKET" "They don't like what I'm doing? BUCKET"
He thinks that's funny, I guess?

Is the finger photoshopped or is that his opinion of us. nevermind.

He's scary, no matter how we look at it.

Obama countdown clock: 190 days. We've made it thru 93.5% of his destruction, with a mere 6.5% left. Though admittedly, the effects will be felt for a loooong time.

After all of this (last 7 + years) it is still stunning that American voters could put such a huge POS in the white house. Twice. Stunning.

Sandee: I fixed the link. Let's hope we can fix his messes.

Z: The link is fixed now. I've never been impressed with obama's sense of humor either. The joke's on us.

Jan: As far as I know, this isn't photoshopped. He often poses with his middle finger like that. As the "smartest man in the room", it's his way of giving us the finger on the sly. Why he's just lost in professorial thoughts, don'tcha know.

Messymimi: Scary and creepy. His mind is a jumble of craporific ideation.

DaBlade: Thanks for doing the math. I'm just hoping we can fix his messes.

Kid: I know how you feel. Electing obama was a singularly stupid thing to do once, but twice was just mind-bogglingly moronic.