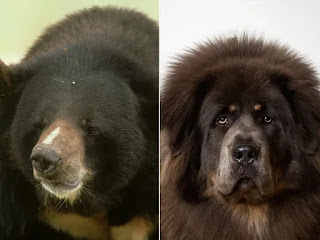 As I personally gear up to go back to China in a couple of weeks, I can't help but reflect on the fact that my only experience with Chinese people in China having cats or dogs is as protein sources. They're sold in the market (live) for that purpose. That a dog, which, turned out to be a bear, was raised as a pet is remarkable all on its own.

The same was true in South Korea, but the protein demand wasn't the same. The Koreans simply enjoyed eating dog. It wasn't taken to the same level in the markets as it was in China, where rats too, were sold as protein sources, as were insects including cockroaches.

Cube, is it possible that one of your house cats is actually a wild bobcat? My dog is actually a dog, but I don't think he is aware of this fact.

After reading LLs comment I'm at a loss for words. Yikes.

I've read about this happening before...in China, of course.

Sometimes i wonder about our Mikey, but he’s probably just mostly Maine coon.

We have a cat who thinks he is a dog, and another cat who think's he is a king of a large country and is right now demanding brush job # 3 for today. He's also an honorary Marine Corporal. Two big black stripes on each forearm too perfectly aligned with each other.

Well, I read a story today about a family that adopted a Puma who was too small for the wild. They take him on leash here and there and also to dog training classes. They say he talks a lot. No idea on the brush job situation but he regularly gets baths.

I'd always heard Chinese thought higher of dogs than they did most people. Hmm. Guess it depends on the area and the relative food supply. People will consider just about anything as a delicacy when the food supply is not abundant. My wife orders the chicken feet at Dim Sum....

LL: I've never been, but I've read that as China's economy improves, the trend to having dogs as pets has risen in some of the more affluent areas, but there are still many places where any protein is necessary to sustain life.

Many years ago, I had a S.Korean co-worker who distributed a recipe for dog that he said was delicious.

DaBlade: I have a degree in biology, but I don't need one to figure out that I don't have any wild bobcats running around my house. I can see where someone might pick up a clowder of very young bobcats unknowingly, but very soon, the tufts and size would be a dead giveaway.

We had a German Shepherd, Dax, who at six weeks old was plopped into a houseful of cats and she ended up exhibiting some very cat-like behavior for a dog.

Sandee: It takes all kinds to make a world. A chemist would argue that it takes alkynes ;)

Granny Annie: It's a crazy world.

Jan: I know, you've touched on the subject of China and dogs before at your blog. But to have a bear cub for two years before you figure out it's a dog is a new one on me.

Messymimi: Our Shoshin is a Maine Coon and we joke about her being a raccoon. She's a big girl.

Kid: Cats do what they want. What they do depends on their personality. In our old neighborhood we would take our girls to the local park, and we would often see a woman walking her dog being followed by a cat. It was hilarious. One day we approached the trio and asked her about this unusual cat behavior. She said she walked her dog everyday and that one day the cat decided to follow. Who knows what was going on in that feline brain?

Lol re: Your Honorary Marine Colonel cat and ruler of a small country. That's how most cats feel, but they don't all have the markings to show for it.

Necessity drives people to do things they might not have done otherwise.

Same deal with our Black Lab and a big orange/ginger Tabby named Alphonse once we were in Cincinnati. He did it in stealth mode too !

Kid: Stealth mode is cute. Like when they think they're hiding under something, but half their butt is sticking out.

The cat I'm talking about walked right behind this woman and the dog, right out in the open, and wherever they went, it followed. It was better trained than the dog who was on a leash. We've never seen anything like it.

"Like when they think they're hiding under something, but half their butt is sticking out. "

Yes, that is cute when they tag along like that.


Dear customer All of us suffer from problems at home difficult to solve and may pose a great danger to your life and life of those you love such as harmful insects dangerous, which threaten human life and the transmission of diseases and cause a lot of physical problems So provided theAl Manarah Company has all kinds of insects
شركة تنظيف منازل بالرياض
شركة تنظيف سجاد بالرياض
شركة تنظيف بالرياض
شركة تنظيف مجالس بارياض
شركة مكافحة حشرات بالرياض