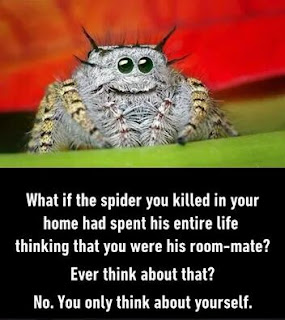 I heard that no matter where you are, you're never more than ten feet away from a spider.

I'm still creeped out about that factoid.
Posted by cube at 7:47 AM

Email ThisBlogThis!Share to TwitterShare to FacebookShare to Pinterest
Labels: spiders

They keep down other less desirable critters, don't they. They're predators - not unlike cats. Technically if you like cats, you should also like spiders...cats of the insect world.

There is also some study where you swallow one spider a week in your sleep (on average) as they crawl into your maw to explore.

My uncle was an entomologist and never killed spiders. They were carefully removed to the outside world. Having few household encounters with the little guys, I don't have to make the "kill"/"no kill" decision very often. I really don't like to kill them.

They leave me alone and I'll do the same. I've taken many outside though. Very carefully.

The only spiders I've killed in the house or garage are the ones who looked like they could kill our cats. We do have brown recluse here also. All other spiders and bugs I capture and put outside.

Actually, we don't swallow spiders in our sleep, that's an urban legend. And i happen to love spiders/arachnids. They are fascinating. Like Sandee, i sometimes take them outdoors. The only ones i kill are the black widows and brown recluses, we can't keep them around.

One of my favorite childhood books, that i read to my own children, was Be Nice to Spiders.

The article didn't cover whether we swallow spiders in our sleep but I remember seeing a disturbing video of one that tried to put down his tent stakes in someones ear (don't search for that.) The article says most spiders "actually prefer to avoid humans" and we have that in common at least.

I want a spider genetically modified to hunt and kill stinkbugs.

Btw, I believe this is the spider named Kim that they taught to jump on command.

Maybe not. But are those extra eyes on Kim or piercings?

LL: A wolf is a predator too and I like them, but only from afar. That is how I feel about spiders. I want them to do their good works far away from me.

The reason spiders are mostly stealthy is that they hate humans as much as humans hate them.
There are exceptions especially the huge ones in my garage that are aggressive and don't run away, but advance towards you. That's when the Big Whack happens.

Adrienne: There was a spider that lived in my mailbox. I would see her everyday and she would run and hide up in the corner while I got the mail. I was OK with that and so I left her alone. I even named her Charlotte (all my spiders are named Charlotte). One day I didn't see her in the mailbox so I picked up the mail and as I walked away, there was Charlotte on my hand.

My husband happened to see the entire incident and told our daughters, "Your mother is having a nervous breakdown on the front lawn."

Needless to say, that was Charlotte's last day.

If a spider invades my home or my personal space, the kill decision is an easy one for me.

Sandee: If they invade my personal space, they're killed. Outside I pretty much leave them alone.

Kid: Lol about the cats. We get huge black spiders in our garage that are very aggressive. They actually lunge towards you instead of running away. Those cannot be allowed to reproduce.

Messymimi: I find spiders fascinating too, but only from a distance. I found out the hard way that little jumping spiders are actually quite friendly to humans. I was sitting on a couch that was up against a window and was watching one of the jumping spiders when it jumped onto my arm. I had a nervous breakdown and that friendly jumping spider was no more.

I know spiders do good works by eating other bugs, but once they come too close, I can't be nice to them anymore.

DaBlade: The night-time spider ingestion story is an urban myth, but spiders and other insects do crawl into ears. When I worked at an internist's office, we had a few cases of earaches that turned out to be from bug tenants.

Kid: I don't know if that's Kim or not, but it was an interesting video. As for those eyes, I was sitting on my couch reading, when I saw something scuttle across the floor in my peripheral vision. I was sure it went under one of our recliners. I ran for a flashlight and the beam reflected on two very shiny points. I knew it was the spider so I yelled for my husband and made him look too. He kept saying that it couldn't be until it moved. My husband sprayed in its general direction, but it ducked under the next recliner. He'd had enough spider-chasing, so he picked up the recliner and slammed it on top of the speedy spider.
When he got the spider's body out, turns out it was a large, brown one and not a cute little jumping spider like Kim. Those eyes shining back at me haunt me to this day.

Always On Watch: Both of you are more tolerant towards spiders and bugs than I am.

Ed Bonderenka: Do you really want genetically modified spiders? That idea scares me. I'd rather hunt and kill the stinkbugs myself.

For a while, a black snake lived in our basement. She moved in after I had some brush near the house cut back.

Nary a stinkbug present while our black snake lived in our basement.

After a few years, she moved out. Back came the stinkbugs after a short time.

Always On Watch: I can handle snakes, but not spiders.

Ed Bonderenka: Did you see Always On Watch's comment. You don't need genetically modified spiders to hunt and kill stink bugs. A plain ole black snake can do the job.