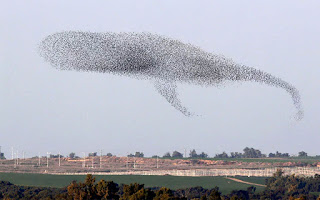 How in the world can this be?

Beautiful. The perfect dance in the sky.

I've seen murmurations here in Cincy. Like schools of fish. I hadn't noticed any patterns that strike at me though.

Sandee: "the perfect dance in the sky" what a beautiful way to put it. It works very well for me.

Kid: It's unbelievable that they can even form a shape. It makes you think about who is the choreographer?

Being under those formations without an umbrella can also be revealing in a far less spectacular way.

I found myself wondering if they've seen these things before. If so, I don't think it is that much of a stretch they could copy them. Animals are generally much smarter than people.

LL: If I could see something like that with my own eyes, I would take all the poop in the world showered upon me.

Truth is stranger than fiction, these birds are amazing.

We have starling mumurations here - just not quite that large - which is a good thing.

I've that seen that sort of flocking in the Washington DC area. In fact it used to be VERY common there in the Virginia/Potomac/Chesapeake Bay area. I don't go to DC a lot these days and can't say if it's still the same.

Messymimi: I find myself in awe of everything that is so beautiful in life and it happens all the time. Life is good.

Adrienne: I'm curious about your post. Do these bird landings happen often? We had something happen once, and only once, but it looked like hundreds of robins suddenly popped onto the nearby yard, they sat for a bit, and then they flew off. They weren't in the sky, but they were there.

LL: Lol. It would behoove us all to stay away from the DC crowd.

Cube - we have starlings show up at least 10 times a year or so. I would estimate the flock size at about 500. They'll land on our property and then do their mumuration thingy.

When I grew up in St. Paul starlings were a huge problem. They would come back to neighborhoods at dusk to roost and did tremendous damage. The obvious was pooping on the cars, but also pooping so much that cars would slide around dangerously in the street. The city tried huge sound effect machines that made big booms to scare them away, which only sent them to the next neighborhood.

We're on fine acres in North Idaho, so we really don't much care. They can poop all they want. Sometimes though when they land it brings to mind the movie "The Birds."

Here's what the Audubon Society has to say about starlings. It's not good.

Adrienne: Oh my goodness! -Thank you for sharing that with me. I had no idea birds could be that bad.

Looks like they are conveying a whale of a story!. They must be alot smarter than we think!

Snaggle Tooth: Lol. Pun intended, right? And I think that shape is a bit uncanny.