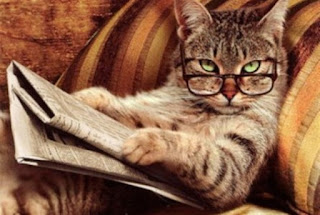 For this Cat Blog Friday...

... a conservative cat because the country can't be run well by the alternative.

The paper published the photo, which says in writing that the blue states form “The United States of America,” while the red states are labeled “Dumbf---istan.”

A spokeswoman for Gillum told the Times they had addressed the explicit shirt with Orozco-Ballestas, adding that they won’t "be lectured about words by the Party of Trump."

It must be nice to be able to walk around feeling as though you never have to apologize for any egregious act...

Silly wabbits... like it or not, the country is being run by the party of Trump. Read it and weep :)

Happy Friday, everybody!
Posted by cube at 6:47 PM

How about listening to the party of good taste and not being offensive?

Thanks to Barack, we have President Trump.

And don't forget to thank Hillary for her part.

What LL said. It take an Obama to get a Trump. Simple as that.

Have a fabulous weekend. ♥

What ever happened to just being polite....Trump was elected so let's move on and behave ourselves and love our fellow Americans

This trash heap is going to get big enough that it will have to be dealt with.

Our culture requires the vast majority to operate reasonably ethically and morally and to participate in the American way. I can see where the country's framers envisioned an expiration date.

Liking each other again For this article, I really like it. It's good for my heart.