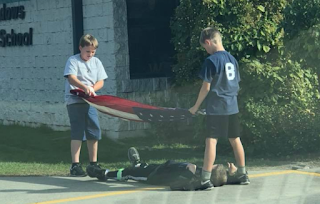 Fifth-grader lies down to protect the American flag from touching the ground: 'Way to show America how it's done'

This gave me hope for America and I hope it gives you some too.
Posted by cube at 8:47 AM

Yes and some good parents that teach the little ones the right way. There's not enough of that anymore.

Right after 9/11, the small Catholic school our daughters attended was part of a service in remembrance of those lost in the attack. One little boy was tasked with holding up the flag and he let it fall to the ground. My husband ran over to him and nicely said, "Son, you never let our flag down." That little boy went on to serve in the military and is now a police officer in our city. I don't know if that made a difference, but it certainly didn't hurt.

One day we heard a ruckus on the empty lot next door and we found out his little brother was driving his truck in circles and making a mess of the ground. My husband ran out and yelled at him that the lot belonged to our neighbor. He was very sorry and told my husband he would never do it again. Who knows where this little one's life will go. Thankfully, his parents haven't told me anything bad after all these years and we're still close.

I'm not talking about hillary's 'it takes a village' thing, it was just about instilling good values into our children, whether by parents or by nice neighbors.

Passing it on to the next generation is critical to making that linkage that so many young people are missing. Thank you for doing that. As with a stone thrown into a pond, the ripples carry.

What a wonderful thing to do. If only everyone cared so much.

The parents have to have strong values before they can be passed on.

LL: Early on the mother of these boys shared a story with me about one of her elder daughters. A girl told mom that she's be staying with my friend's daughter. It was a lie and my friend called the wayward girl's mom to warn her that her child would not be safe at their house, but God knows where. The wayward girl's mom launched into a very nasty attack on my friend and basically told her to mind her own business. Unfortunately, I wasn't surprised.

To make a long story short, we made a pact that day very many years ago that if you see my kid messing up, you have my permission to let me know and I will be grateful. It's worked out over the years. All of our kids are tax-paying, law-abiding members of society. A parent's dream.

Messymimi: Those little boys were taught well. That's how we were taught and I'm so glad to see other families doing the same.

Jan: True. Unfortunately, some parents are little more than children themselves and they don't know any better either. It's a cycle of bad choices that needs to end.