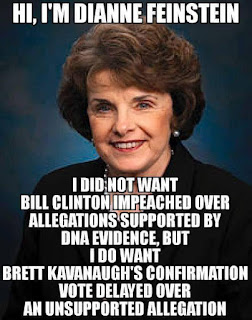 Post-Kavanaugh, Democrats Will Reap The Whirlwind

She used to be in and out of the Sheriff's Office all the time. I never liked her. Ever.

Yes, vote. Then challenge the left to impeach BK over this BS accusation. And Hypocrisy is the alter the left worships at.

President Trump's next pick will be the most conservative woman that he can find.

Let’s hope LL is right. That would be a sight to see.

I am amazed on a daily basis at how unstrung and out of touch the left has become.

Is it me or does her eye sockets resemble two sunken black souless holes?

"The Malevolent Left"
Dems are demonically motivated, whether they know it or not.
Evil proceeds from their party, the party of slavery and of abortion/murder.
And the republicans do not treat them as such.

Chi Spy Di Fi ... her late letter plot didn't work out as she planned. Can't say I'm sad about it.