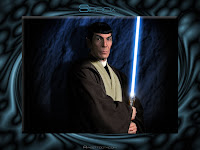 Brandon Root of the Spiteful Critic makes a compelling case...

Hold On, I've Seen This Before: How Star Wars, (new) Star Trek , The Matrix, And Harry Potter Are Actually The Same Movie

Is there nothing new under the sun?
Posted by cube at 9:47 AM

There is nothing new under the sun.

I do think there are a lot of archtypal themes and characters that crop up over and over again in literature...and thus, in other forms of storytelling too. Seems like people sort of like the comfort of seeing something they are familiar with and understand...

Sorry to be the skeptic but I found his analysis overly broad. It was fun to read and he wrote it well but still too generalized.

CrazyBunnyLady: Yeah, it was a rhetorical question.

Laura B.: Archetype is the operant word here. I mean, who wants to see the hero fail at his or her quest and die a miserable death?

Chuck: No need to be sorry. It was quite broad, I agree. Notice that it was the new Trek that was included in this analysis and not the old, more complicated Trek.

That was amusing. He makes some good points. I'm afraid that the truly new story line is a rare bird.

Why work for originality when all those proven winners are there for the picking?

The powers that be feel that they will only make money on old, worn and torn ideas. They will not fund ideas that are original and delightful. We are the losers.

Ananda Girl: Like laura b. mentioned, people do feel comfortable with certain themes.

Jan: All four of these movies made a lot of money.

Crazy4coens: At least these 4 movies aren't remakes. Those are the very worst.

He's not saying anything new.

The monomyth, the hero's journey, is a thoroughly documented and well understood cookie cutter story arch.

The four examples he gives are the least of it.

Of course the general idea is not new. It's the implementation of it. Think machines - there are what, 3 different simple machines? Everything else is variations on the theme?

Like someone mentioned about machines, there are only 3 major plots: Man vs. Man, Man vs. Animal (monster), Man vs. God (machine).

I'm never so much concerned with the plot because I already know it. My entertainment rides on the story, the way it unfolds, the strength of the telling and the variation of the theme.