As The Plot Thickens 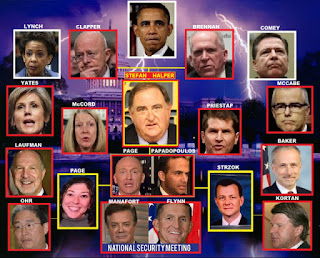 Stefan Halper- Agent Provacateur In His Own Words

Follow the breadcrumbs - they all lead back to Barack Hussein Obama.

Treason if the right was doing these things. Business as usual when the dems are doing it though. Makes me sick.

The fish rots from the head down.

Sandee: It makes me sick too. They made Watergate the end of the world, but they treat this as as ho hum when, in reality, it's many times worse.

LL: That for sure and we all know who's wearing that rotting fish head.

Nothing new to say.
Can't get the Soviet Style Media to get upset at this.
They hold the microphone.

Ed Bonderenka: The wheels of justice turn very slowly. The truth will win out some day.

Every day i hope for something to break. Someday it has to.

Messymimi: Drip...drip...drip. I know it's frustrating, but patience is a virtue.That's what I keep telling myself.