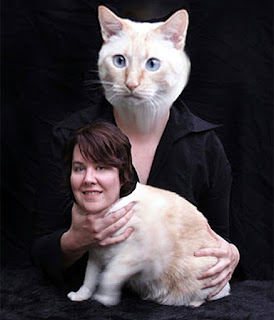 Josiah Zayner: ‘I want to help humans genetically modify themselves’

The DIY DNA kits utilize a technique that involves an enzyme complex known as CRISPR/Cas9, found in many bacteria. CRISPR (short for "clustered regularly interspaced short palindromic repeats"), is a short, repeated sequence of RNA that matches the genetic sequence the researcher wants to modify. It works in concert with Cas9, an enzyme that cuts DNA like a pair of molecular scissors.

If that wasn't bad enough, Professor George Church, of Harvard University, who pioneered the use of the CRISPR technique, said it would be possible for criminals to use the technique to disappear from forensic databases or evade detection.

It could undermine DNA as a tool of crime detection completely or, at the very least, make its use as flimsy as a lie detector. The implications are sobering.

Now you think of the sequelae of your work?

I have three words for that - ACK, ACK, ACK!

The historical archives show that Martians beat us to it. I admit that they didn't use gene therapy but it's all there in HD color on YouTube. Does it really work? Pictures don't lie...

LL: You scoff all you want about Martians, but, at this point, we know that aside from a few microbes, we will be the Martians. Genetic biohacking and prions are some of the things that keep me up at night. Unfortunately both are alive and well and being mishandled daily as we post.

The best Sci-Fi is the aftermath of a careless scientist knocking over two beakers in a lab - which combine, grow and eat Manhattan.

Scientists today are dabbling with quantum dimensional space and could open a fissure that swallows the Solar System too, so if one thing doesn't get us, the other will. Don't fear the reaper. https://www.youtube.com/watch?v=ClQcUyhoxTg

LL: Thanks for that sci-fi clip, but I know you're not talking about the dangers of the Large Hadron Collidor because its 2018 run which began on 4/17/18 isn't scheduled to stop until 12/3/18. As the Rolling Stones song goes, "Time is on our side," until it isn't, right?

Fear of fire is one of the most elemental fears, next to fear of death. We all fear. Prions scare me and so does genetic tampering by people who never took a science class in their lives. When I wake at the magical hour of 3 AM, that's what I fear.

I think anything is possible. Why don't they alter the hate out of folks. That would be a great start.

OK, first - that picture cracked me up! Second, who would win in a genetic dust-up, this Zayner fella or the Russian Popeye?

And lastly, I recently read "Quantum Space" and "Quantum Void" by Douglas Phillips - sci fi on that very topic. It was cheap on Amazon and both were surprisingly fun reads. BTW, LL - MORE cow bell! love me the B.O.C.! Saw them in the 80s.

Sandee: Your idea is high in altruism, but doesn't make the actual wish list. What did former NASA biochemist Josiah Zayner wish for, wait for it... big biceps.

Do an image search of 'body modification' and you will be as I am that people will be hoipping all over this to turn themselves into -fill in the blank.

As long as they don't screw up Mexican Food !

DaBlade: First, let me thank you for the Russian Popeye pics that are now indelibly stuck in my brain.

I've never heard of Phillips, but I'm always in the market for good sci-fi. I'll check it out.

I don't care what LL or BOC say, I fear the reaper every gosh-darned day. I think we all do in some way or another.

Kid: OMG it's unbelievable that people are driven to do that to themselves. It evokes scenes from what I envision from Dante's "Inferno."

Yea.... Not a single one of these freaks existed in 1960. Unreal. Some mind bending stuff going on. Drugs? liberalism? I don't have a single tattoo and never will. How about the guy with the big holes in his cheeks. How does he get a meal down? Unreal.

Kid: They looked bad in their glory days. I can't imagine what they look like now.

I sometimes wonder what goes through their 'mind' as they age 30-40 years, get up one morning remembering themselves in grade school perhaps and look into the mirror.

And for some of them, it's gotta take 2 hours just to get all the metal back in their face. There is much mental disease out there.

I wouldn't commit to a bumper sticker for God's Sake.

Kid: You make a good point about so much mental disease being out there. There is and there's nothing we can do about it.