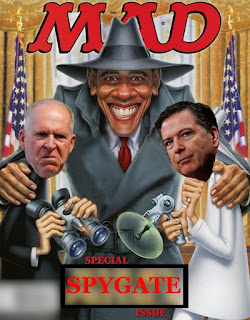 A stroll down memory lane when in 1964 then-President Lyndon Baines Johnson [D] used the FBI and the CIA to spy on his political opponent, then-Senator Barry Goldwater [R].

I Spy: The Media And President Lyndon Baines....Obama?

What do ex-presidents LBJ and 0bama have in common?

Jug ears, yes, but more importantly they're both democrats who received lots of protection from a servile press.

2018 Newsflash: the liberal media isn't the only media in town anymore.
Posted by cube at 8:47 AM

There can't be many people who are actually surprised that the Obama Administration weaponized the FBI and CIA in the same way that they did with the IRS.

Yet there are many out there that don't believe any of this. The evidence is there, but they aren't buying it. What a shame.

LL: Not surprised, but knowing and proving are two different things. I don't want there to be any doubt in the minds of democrats and NeverTrumps who refuse to see what's obvious to the rest of us.

Sandee: I can understand a lo-fo Joe Schmoe not believing the evidence, but I don't believe for one second that the college-educated political junkies aren't connecting the dots. They're just refusing to admit that it looks very bad for 0bama and his light-bringer messiah legacy.

They will justify anything he did as being “necessary”. The human mind has to justify what it does or what it approves, or change the behavior. If you don’t want to or are not willing to change, you find a way to justify.

Funny "MAD" pic! Been a long time since we've had a squeaky-clean leader!

This is going nowhere. Clapper, crapper, comey have said President Trump is a liar. Plus cakeboy eric holder said the FBI and DOJ should tell the president to go F* himself.

Even the Commissariat fell.
It can happen.

Obama admin weaponized the FBI and CIA? "And the media reaction here? Ho-hum." But you're right. Thankfully those of us still interested in truth no longer funnel ourselves thru that 3 network choke point.

Messymimi: First there was no spying and now the spying was for Trump's safety. Oh please.

Snaggle Tooth: Glad you liked the pic. I don't think we've ever had a squeaky-clean leader. We are all sinners.

Kid: The investigation is moving at a glacial pace and it is frustrating, but they're only going to get one shot at this so it has to be right.

Ed Bonderenka: Right. It can happen. I just hope it doesn't take 50+ years.