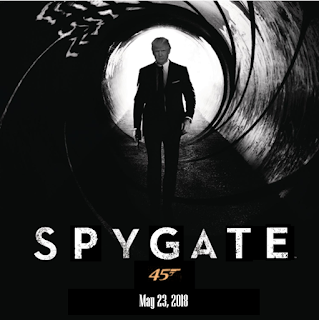 Four things to understand about SPYGATE:
1) There was no spy in the Trump campaign.
2) The spying that did NOT happen was totally justified.
3) It would be bad for national security to identify the spy who doesn't exist.
4) His name is Stefan.


But this article by Clarice Feldman is about more than that...

Feldman writes, "I'm talking about a different series of unmaskings: Heroes and Knaves, Allies and Foes, Pundits and Nincompoops, Friends and Enemies of Israel, all unmasked by the genius of President Trump."

The article includes a salute for retiring NSA director, Admiral Mike Rogers, the hero who blew the whistle on the intelligence shenanigans. We would never have known of the spying and FISA violations without him.

Clarice's Pieces never fail to impress.
Posted by cube at 8:47 AM

I'm pretty sure I know who was driving the spy van too. Amazing how corrupt our government had become. I say had because I think the swamp is getting drained.

General Clapper said that President Trump should be THRILLED that they put SPIES in his campaign to collect against the members of his team.

Drain the Swamp
Lock Her up
Build the Wall
MAGA

Sandee: 0bama and Jarret's fingerprints are all over this.

LL: Trump may have been born at night, but he wasn't born last night. What gall these swamp critters have.

It's actually humorous to watch and read how lefties excuse the whole SPYGATE situation....their words would stick in their throats if it was Obama who'd been spied upon..........'it's FINE!' 'This happens ALL the time' 'We spied to PROTECT Trump!' you can't make this stuff up. It's their version of taking a knee, isn't it.

It's their version of justifying their behavior.

Z: They think we're mentally challenged. I'll enjoy their legal gymnastic gyrations more when they get indicted and then charged for their crimes.