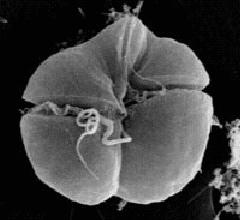 Floridians are familiar with red tide, algae bloom outbreaks that occur along the Gulf Coast beaches every summer. This year's red tide blooms have been the worst many locals have ever experienced, lasting longer, covering a larger area, and killing more marine life.

Divers have documented a dead zone 20 miles offshore in the Gulf Shore from Johns Pass to Clearwater. And by dead zone, diver Mike Miller said, "I'm talking zero things are alive out there. The only way to describe it is a nuclear bomb."

Scientists theorize that the red tide blooms (caused by the microscopic troublemaker algae, Karenia brevis) became trapped underneath a thermocline, or a zone of colder water, which has forced the bloom to stay in the area much longer than normal.

Florida is one weird place.
Posted by cube at 12:45 PM

It sure is. That algae has actually crept up here into parts of North Florida, which is quite unusual.

I didn't mention it in the post, but the newspaper article read that the diver, "struggles to convey the horror he has seen on the ocean floor." I found that statement quite creepy.

That makes me wonder...why is it so bad this year and what are we doing to our environment to make these bizarre things happen! Thanks for the comment on my blog!

The director of red tide research at the state Fish & Wildlife Research Institute says the dead zone was caused by a rare alignment of different water temperatures called a thermocline. Rather than forming in August, this year's outbreak formed in January, when varying layers of temperatures formed. Red tide cels don't even like to pass through temperature differentials of 2 degrees.

Wait till the red tide passes or you'll turn red!