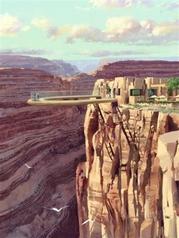 An American Indian tribe, the Hualapai, is planning to build a glass-bottomed walkway that will jut out 70 feet from the edge of the Grand Canyon.

The horse-shoe shaped walkway, with a glass bottom and sides, will be supported by steel beams, is designed to hold 72 million pounds, and will accommodate 120 people (unless one of them is millionaire "documentary" filmmaker, Michael Moore, in which case he and his lardass will have to venture out alone), said Sheri Yellowhawk, chief executive officer of the Grand Canyon Resort Corp., the tribal-owned company that is overseeing the project.

"You're basically looking 4,000 feet down. It's a whole new way to experience the Grand Canyon," Yellowhawk said.

The project is still seeking an insurer, said architect David Jin, who said he came up with the skywalk idea while visiting the canyon in 1996.

I'm sorry, I must have missed the insult - all I saw were factual statements in the post...

Glad to hear Katrina spared you.

But seriously, who in their right mind would insure that lawsuit-waiting-to-happen?

Heh heh heh. Factual, that's what I say! If I were in the insurance field, no way I'd insure that thing. It looks like an accident waiting to happen.

Thank God Katrina spared me & mine, but I'm hearing very depressing stories about severe flooding in some neighborhoods in New Orleans. Reports of people on roofs waiting to be rescued, etc.

Interesting though I am not sure how your reference to MM fits in. Surely there are much fatter people out there... :D

I know there are fatter people out there, but they don't deserve my insults. Moore does. I rarely pass up an opportunity to offend him.

It's not his physical weight, it's his massive, massive ego.

And the size of his paranoia.

As far as insuring that thing, the guy had the idea in 1996 and is still looking for someone to insure it? Doesn't that say a lot right there?

I think that is a really awesome idea. I'd love to go to the Grand Canyon someday.

Oh, and I love the Moore remark.

Interesting idea. Mike Moore. Sheesh, I'm telling, as someone from his home town and state (and I've met him, egads), I just cannot go anywhere without some mention of him. Yes, his ego would be heavy for that proposed walkway.

Sorry, Waderz. If it's any consolation, I feel your pain.