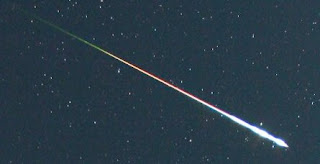 Bill Cooke of NASA's Meteoroid Environment Office at the Marshall Space Flight Center says it's going to be a great show because the Moon is new on August 12th--which means no moonlight, dark skies and plenty of meteors.

How many? Cooke estimates one or two Perseids per minute at the shower's peak.

I put a note on my counter. We are away from city lights, so we should be able to have a nice view of the show!!

We had too much cloud cover to see any.

The display will not peak until August 12th and 13th so we'll try again Sunday night/Monday Am, when the showers reach maximum when rates could increase 5-10 fold.

The darkest hours before dawn are best.

always a sight to behold!

Blast! It was overcast for the first time in two weeks!

i only saw a couple last night right before retiring and only the tail end of a few this morning!

nanc: At least you got to see some. Poor Brooke didn't see any.

it rained here, too. Ah, well. Maybe next time?

here in Oregon, every August around this time we have three to five days of meteor activity. its fabulous! we have been on the porch these three nights past, with two more to go. Last night was the best, but the next two are expected to be acceptable as well.

besides, i can sit on my porch in the dark, with a drink in my hand and my husband by my side, i'm good with that.

bw: There will be plenty more chances.

dak: Sounds like an excellent way to pass the time, if you ask me.