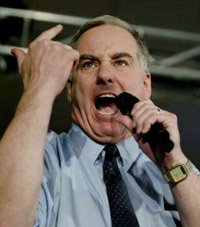 From The New York Post online comes this editorial that begins by saying, "not all the surrender monkeys live in France".

It goes on to describe Howard Dean, the Democratic National Committee Chairman, a "sedition-mongering former governor of Vermont who once presumed to the presidency and who now is working overtime for a terrorist victory in Iraq."

Howard Dean - Just Another White Flag Democrat.
Posted by cube at 11:23 AM

The photo shows Dean shouting, "I have two neurons, and one of them is inhibitory!"

Not all of the surrender monkeys live in France, but according to the Simpsons, all of the "cheese eating" ones do. http://en.wikipedia.org/wiki/Cheese-eating_surrender_monkeys

I wonder what the American surrender monkeys eat?

Raw meat? I dunno, but whatever they do eat, maybe we should keep it away from them. If they're very hungry, maybe they won't say stupid things that embolden the islamofascists.

I hope Dean keep running his mouth. The more he talks, the more the Dems have to try and cover for his outlandish remarks. The more Americans hear from Dean, Pelosi, Kerry, and Kennedy, the more inclined they will be to NEVER consider voting Democrat.

Yes, tlm, just like my favorite scene in Scanners!

I was looking for that very clip, but ran out of time. I definitely had it in mind while I posted this.