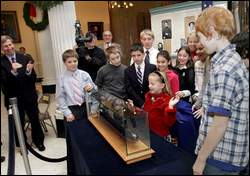 Thanks to a letter writing campaign by a group of schoolchildren from Dover, New Hampshire, the state will soon have a Virginia-class attack submarine named in honor of the Granite state.

Lynch said it is fitting that New Hampshire has a submarine named in its honor seeing as the Portsmouth Naval Shipyard, which has the mission of maintaining the Navy's sub fleet, has such a rich naval history.

The article which can be found here goes to prove how just a handful of people can mold public opinion.

[Hat tip to Grandpa F for passing on this article]
Posted by cube at 11:40 AM