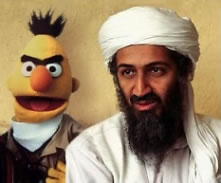 The fate of the Western world's most wanted man Osama bin Laden remains uncertain after Al-Jazeera television admitted that a videotape of his right-hand man claiming the Al-Qaeda leader was still alive was three months old.

Al-Jazeera said a videotape it aired Wednesday showing Al-Qaeda number two Ayman al-Zawahiri claiming that bin Laden was still alive and leading "jihad" or holy war against the West dated back to September.

Al Jazeera hears weakness in the words of the White Flag Democrats and decides that it is a good time to re-release this oldie but goodie.

It's been a LONG time since we've heard from Bin Laden himself. I wonder if he is dead? I can hope, can't I?

It has been a long since since we've heard from UBL. I hope he's just a greasy smear somewhere.

It doesn't matter. You take out Bin Laden, there'll just be a Bert Laden to rise up with his army of insurgent pigeons and take his place.

Maybe he's dead, but they are using strings and such to give it the illusion he's alive, a la 'Weekend at Bernie's.'

I don't understand. Why is Bert standing next to Osama bin Laden?

I don't believe he's dead yet; but he's no spring chicken, so if people keep saying "he's must be dead" for long enough, one day it will be true.

pheonix: I get the feeling of a "Weekend at Bernie's" about UBL, too. I hope it's an accurate one.

caz: yes, eventually everyone must die.

While Dean makes one stupid remark after the other, the public runs the risk of getting a sudden increase in blood pressure, bursting an artery in their brains & dying of a stroke.

Larissa, this will explain it all:

Everyone picks on Bert, but Ernie always gets a pass. Sheesh.

I prefer to think he's still alive, so he can be caught one day.

It would be satisfying to catch UBL, however, what then? A never-ending trial with an infinitely patient judge who would allow the defendant to spew his insane vitriol? Oh wait, that's the Saddam trial reality show.

I vote for the DNA identifiable greasy stain. It's so much easier.