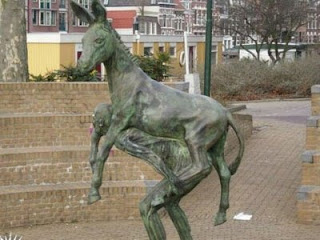 Investor's Business Daily has a short article on the cause of the economic mess in which we currently find ourselves...

'Crony' Capitalism Is Root Cause Of Fannie And Freddie Troubles

There are plenty of guilty parties named. One that pops out at me is former Clinton Justice Department official Jamie Gorelick. Remember her? She was instrumental in America's inability to connect-the-dots when it came to fighting terrorism because the CIA and the FBI were stopped from sharing information.

Big mistake number one from Gorelick...

And now we hear about big mistake number two from Gorelick, namely she took $75 million from the Fannie-Freddie piggy bank.

Sometimes I wonder if these liberals are just stupid or if they are out to destroy this country.

In any event, isn't it past time the guilty parties be held accountable for their misdeeds?


[The BLOG note: The photo is courtesy of AmericanShooter. The statue itself has an amusing backstory.]
Posted by cube at 6:47 AM

There are going to be plenty of dirty hands in the brand new 700 billion dollar pot, too.

There is just so much going on, it makes my head spin, IT'S Crazy!!
I sit here and I don't like what I am seeing or the solutions to all this crap, but I don't think they really give a hoot what the people think and in the end they will do what they want.

brooke: I'm not happy about this whole thing, but thanks to the house republicans & McCain, the bill has been toned down a bit. We're not privvy to the sausage-making, but it is less of a porkfest than it was. At least the ACORN portion was cut out.

wblmom: My head is spinning, but it's from frustration. I can't understand why we're not broadcasting all the negative information that is extant on this pseudo-candidate. This guy is such a poseur.

dd2: They have suspended the voting and the armtwisting has begun.

I hope those SHORTSIGHTED dingbats are happy now!\Some people just don't care about the bigger picture, i know that You Cube and DD2 can see it,but many others just think it's all about themselves and don't realize that this WILL effect themselves as well.

Now that the House vote on the bailout bill has fallen short, it's time for some good ol' American capitalist ingenuity.

I hope to see Pelosi again wearing the deer-in-the-headlights look.

bob: I know that the credit crunch has to be eased with an influx of capital. Banks must be able to loan money to other banks or all commerce, as we know it, is hampered. That being said, there are other ways to achieve this. I heard Michelle Bachmann (R-MN) of the Financial Services Committee talking about such alternatives on Bill Bennett's show this morning.

Me, it makes me uneasy when there's a bill that democrats love to pass. Seeing them smile makes me nervous.

I'm hoping for an even better bill.

aow: There was no ingenuity on Pelosi's face, just egg.

Let's hope our people can come up with a better solution than one that makes the democrats -- who created the problem -- smile.

CUBE ..that picture is hilarious!

I took one look and thought "the Dems have been screwing Americans for years..perfect" and then I clicked on your link and VOILA..I am not alone in thinking that's what the picture SHOULD be signifying!!

(glad you survived a weekend full of family! I hope it was fun!)

Barney Frank. Chris Dodd. Nancy Pelosi. The list goes on. There should be a wanted poster with all of their mug shots on it.

i would recommend they take that 700 billion and redirect it back into the economy in other ways. it should have been designated a LOAN - HELLO?!?

or they could buy back some of the institutions the sawoooodis have bought over the years like harvard...

Z: My thoughts exactly. I always try to match the photo to my post & I thought this was one was spot on when I laid eyes on it.

Her's is a name that may come up in this Justice Department investigation.

One need only examine the shocking default rate of Habitat for Humanity "Homeowners".

Understand that, at least while I was doing my service in 91-92, the prospective owner had to perform 500 "grueling" hours of service in the construction or maintenance of new Habitat homes.

In exchange for their 500 hours the owner would recieve a interest free loan on a new home. Not remodeled, renovated, or other but new.

Yet the default rate is nearly 60%.
This with a screening and education protocol to prepare these new homeowners.

Yet to say that lending money at low rates to people with zero to awful credit histories was stupid equates to racism or class-ism.

Unwillingness to tell the truth or to challenge extant lies has caused this obvious and predictable problem.

So now we are left with the inevitable chickens coming home to roost and what is the magic slogan?

Did everyone miss the picture of the guy getting ass rammed by a donkey at the top of the post? I didnt need to read anymore after that.

chuck: I'd love to see it, but I'm not going to hold my breath.

Cheney waklked away from $200 million dollars when he elected to run for VP!

He has given more money away than all the last democrat candidates, presidents and vice presidents combined!!!!

This "crisis" is one of typically greedy democrats claiming, as usual, to be "of the people" while scamming the system with no scrutiny from the msm, and gutless republicans afraid of being called rascist whenever corrupt democrats and their serfs are caught redhanded.

The democrats own 90% of this fiasco and heads need to roll.

Ducky: It's a big deal to me because she is a greedy democrat & doesn't deserve money for favors.
Republicans who do what she did either resign, go to jail, or both.

Let's have a level playing field.

BTW I noted that you mentioned Cheney & didn't bring up HALIBURTON. Are you slipping? ;-)