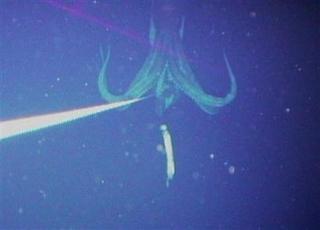 No, it's not an old sea myth or a bad horror movie.

This giant squid, the 26-foot long Architeuthis, was captured on camera by a team led by Tsunemi Kubodera, from the National Science Museum in Tokyo, as it attacked prey nearly 3,000 feet deep off the coast of Japan's Bonin islands.

The video of the squid in its natural habitat was taken in the fall of 2004. I suppose they have their reasons, but I don't understand why they would keep this cool news quiet for over a year.
Posted by cube at 12:18 PM

I know why! It's the right-wing conspiracy acting up again! Maybe the squid lives in oil-rich waters?

OMG it hadn't occurred to me until now...perhaps it's a trained and armed squid? It's the government!

I can't believe this isn't generating a ton of comments on its own merits. This is a genuine Architeuthis. No photoshop here. This is the real thing.

thanks, his article is very helpful

thanks, his article is very helpful