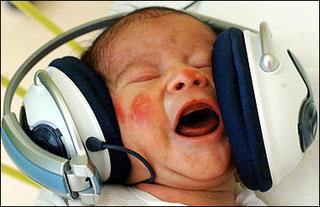 Researchers fear the growing popularity of portable music players and other items that attach directly to the ears - including cell phones - is contributing to hearing loss in younger people.

Increasingly, Robert Novak, director of clinical education in audiology at Purdue University in Indiana, says he's seeing too many young people with "older ears on younger bodies" - a trend that's been building since the portable Walkman made its debut a few decades back.

This should force a reexamination of the experimental program of musical therapy to improve the care of newborns which began 2 years ago at the 1st Private Hospital in Kosice-Saca.
Posted by cube at 12:38 PM

From Blogging to Vlogging, Fresh Voices Add Perspective
Home-based 'Net reporters have shown many hitherto respected members of the world print media to be blatantly unfair and unbalanced.
Interesting blog you have - good work Play poker room the most popularity game anywhere

I've been warned about hearing loss by my parents as long as I can remember - the rule was no music so loud they could hear it over your headphones - and they limited the time we were allowed to listen.

Then, macho me, failed to use hearing protection whilst serving in the Corps and shooting privately, also... now my hearing is still medically good, but only if there is no background static to override what you are saying.

dan: who hides in anonymity, go to blogger hell!

cary: sorry to hear that (no pun intended). Hearing protection is imperative when shooting. They make some excellent ones nowadays that only block the loud bangs, but not people speaking.

cube- Are you interested in saving money on your auto insurance?