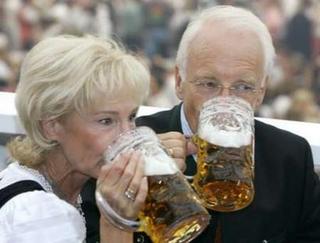 Bavarian Prime Minister Edmund Stoiber and his wife Karin drink from their Bavarian steins during the official opening ceremony of the original Munich Oktoberfest September 17, 2005. Hailed as the world's biggest and most famous beer festival, the 172nd Oktoberfest will be visited by 6 million people who will consume 6 million liters of beer (about 1.578 miilion gallons). Reuters/Wolfgang Rattay.

I see that Edmund and Karin are working on their respective liters. Everyone must do their share.
Posted by cube at 11:13 AM

I don't think I've ever seen anyone hold a beer stein the way this woman is...very unusual.

It's probably too heavy for her to hold any other way. You must admit, their sense of civic duty is admirable.

Sweet, I wish our leaders would do that kind of stuff.

One of us is doing something wrong and I think it's me. That looks like a whole lot more fun.

Oh yeah, Oktoberfest sounds like my kind of holiday.

Huh, I´d say if there´s 6 million litres consumed by 6 million people there must be bunches and bunches of folk that don´t drink beer. Because drinking people usually are drunk on Oktoberfest, which they don´t achieve by a single litre!
Ralph from allralph.de

Ralph: You did the math. Good for you.