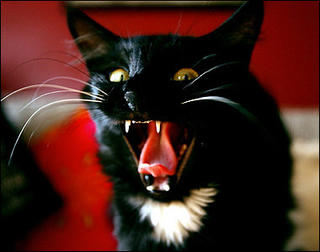 German police called to a break-in at an apartment in the northern town of Itzstedt found the intruder still on the premises and hiding under a kitchen cabinet.

The "cat burglar" had somehow crawled into the ground-floor of the apartment, broken window blinds, torn down drapes and trashed furniture.

Police also found fish and fish remains from a broken aquarium scattered around the apartment, said Julika Reinhardt, spokesman for the police in the town north of Hamburg.

Two officers finally found the offender, a cat, hiding under a kitchen cabinet but the heavyweight male resisted arrest, biting one officer in the thumb before they both managed to overpower it.

Reinhardt said the cat, wearing a name tag, was returned to its owner who would have to pay for the damage.

"No one knows how the cat broke in," she said. "But the damage was considerable."

The cat's name was not revealed and no next of kin could be reached for comment, but it looks like another case of a good cat gone bad.
Posted by cube at 10:10 AM

That cat is freaky. I mean, I love cats, but I wouldn't own that one.

The cat in the photo isn't the cat that tore up the house in Germany & slurped up the aquarium fish (a childhood full of cartoon cats drooling over the fishbowl spring to mind here). If I don't have access to a real photo, I will use a photo that is illustrative of the post.

Just curious...which cat did you mean? or both?

I wonder if the cat's owner, decided to keep it? After all the cat did cause consider amount of damage LOL.

I don't know about that owner, but if it were my cat, it would be in the doghouse if it trashed somebody's house. My cats don't trash my own house...much.