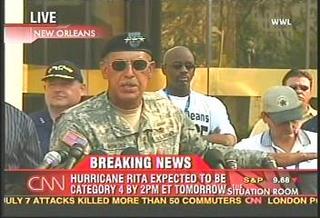 During a recent press conference, the Mayor of New Orleans, Ray Nagin began to lose control of the press and General Russel Honore had to jump in and save the mayor's sorry ass.

Read the entire transcript at radioblogger It's worth a read, but basically the good general told the MSM: You are stuck on stupid!

You go, General. It's about time someone told off the press.

Reminds me of The Band-Aid song... MSM is stuck on stupid, cause stupid's stuck on them (or should I say, Dems).
Posted by cube at 1:35 PM

Mayor "Let the schoolbuses sink" Nagin did make a comment that Coast Guard Vice-Admiral Thad Allen was trying to make himself the "federal mayor of N.O." because the Admiral was trying to talk him out of letting the people into the toxic sludge too soon.

The people of Nawlins have to vote out the corruption-ridden, graft-taking, nincompoops that are in office...but it's not bloody likely to happen, if you ask me.

"You are stuck on stupid, I’m not going to answer that question”

But then this is not the first time

General Honore is of the old school military, where the information that the military is operating with is only trusted to the military. Anyone on the outside will only be told enough to keep them out of the way. This eliminates a lot of armchair quarterbacking by unqualified nincompoops.

That's right. I had forgotten about the BS remark. This individual doesn't make excuses, he just gets the job done.